A thought-provoking piece from Eric Sprott titled “The ongoing rot in the economy” takes a hard look at today’s US economy, suggesting that real disposable income per capita has only increased modestly since the Great Recession. The major takeaway from this article is that 40 percent of the poorest US households still spend more than they earn. The question we are left to ponder: How is an economic recovery possible, given these circumstances?

Telegraph reporter Jeremy Warner analyzes the concept of quantitative easing in his article “Have central banks been breaking the law?” Warner theorizes that quantitative easing has played only a minor role in restoring growth. He adds that QE skews the distribution of wealth to those who are already wealthy, stealing from the poor.

An informative read from Wall Street Journal reporter Sarah E. Needleman, “Skills shortage means many jobs go unfilled,” posits that small businesses aren’t hiring because they can’t find candidates with the proper skills. About a third of 848 small business owners surveyed reported unfilled job openings in June because they couldn’t identify qualified applicants. “We’re stunting our growth right now because there’s a limit to the number of projects we can handle at one time,” says Melanie Gass, a small business owner.

A Zerohedge.com article addresses soaring expectations for much higher earnings growth in the second half of 2014. “The ugly truth about where the 2nd half earnings growth miracle is supposed to come from” suggests that the Q3 and Q4 combined earnings growth rate will jump to 9.9 percent, with financials leading the way, a dicey proposition at best.

John Gittelsohn’s Bloomberg article, “Chinese cash-bearing buyers drive US foreign sales jump,” addresses increasing Chinese purchases of US homes. According to the National Association of Realtors, buyers from Greater China spent $22 billion on US homes in the year ending March, more than any other nationality. “The uncertainties in China’s domestic market are contributing to a higher growth in Chinese interest in US property.

Another item of interest is this infographic from Reuters, providing insight on Europe’s biggest gas supplier: Russia. If the U.S. and the EU want to put serious economic pressure on Putin, the solution is simple: find another source of energy. The U.S. could become a major replacement supplier to the EU given the right political circumstances. Click the graphic below to learn more. 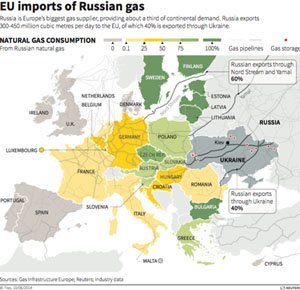 Check back soon for more articles of interest here at Ramparts!