As 2017 began, bond investors speculated on the impact of the new administration’s policies. How inflationary might lower taxes, deregulation and a big infrastructure bill be for the U.S. economy? The first quarter spike in 10-year Treasury rates (shown below) indicated that the bond market was expecting big increases in growth, inflation and interest rates in 2017. As is normal in Washington, however, Congress was unable to get its act together to enact major legislation in a timely fashion. Interest rates fell back as a result, with the 10-year Treasury ticking just below 2.1 percent by Labor Day. Some initial successes on the deregulatory front were all the Trump administration could brag about until late December, when the Senate finally passed, and the President signed the Tax Cuts and Jobs Act of 2017. American businesses received what they had been requesting for a decade: certainty regarding future tax rates on domestic and foreign income, and a new, much lower tax rate on earnings previously held overseas. Business confidence and future capital spending plans increased as a result.

Meanwhile, as expected, the Federal Reserve under Janet Yellen raised short term interest rates three times in 2017, pushing the overnight lending rate up to 1.25 percent. These moves, along with well-telegraphed plans on the part of the Fed to begin reducing its balance sheet, might’ve caused longer term interest rates to rise as well during the year, but it didn’t happen. As the graph to the right shows, long rates ended the year about where they began, at 2.42 percent.

Real-world effects of monetary policy often run counter to what investors expect. Many believe, for example, that if the Fed were to raise short-term interest rates by another 2 percentage points over the next two years, long-term rates would rise in lockstep. But because the long-term bond market anticipates economic events, rather than simply reacting to changes in the cost of money, this could be a dangerous assumption. The Fed may be determined to drive up rates on the short-end, but the long-term bond market may react differently— because it is driven by different forces. Inflation expectations, other central bank policies and geopolitical trends are all factors beyond the Fed’s control.

Given the many moving parts in determining bond yields, we must calculate the most important “factor” at a given time. Monetary policy, fiscal policy, geopolitical events and inflation pressures all jockey for the greatest “weighting” in the pricing equation. Monetary policy had the lead over the last 10 years or so, while fiscal policy and foreign and geopolitical risks seem to have taken the lead lately.

Further complicating things, foreign bond yields don’t always cooperate either. To illustrate the ongoing disconnect in bond yields worldwide, we need look no further than the graph below. Massive bond purchases by the European Central Bank (ECB) have driven European sovereign bond yields to historic lows. Historically, the long-term US Treasury bond had the lowest yield, as the benchmark for “risk-free” assets. ECB purchases have driven yields on Italian 10-year bonds, and even some European corporate high-yield bonds, lower than those on the U.S. Treasury! 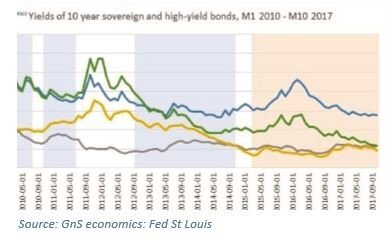 This obviously cannot last forever. These interest rates will eventually snap back to historical norms, and when it happens it could be dramatic. As we enter 2018, Jerome Powell, the new Fed Chairman, will obviously be monitoring events in the U.S. as well as overseas. In the U.S., the consensus sees another 3 increases in short-term interest rates in 2018, which would raise the U.S. overnight lending level to 2 percent to 2.25 percent. Historically still quite low, but far better than the “zero” we’ve been earning on cash for most of the past decade.