January is prediction season, and here at Fort Pitt we like to demonstrate that we’re at least thinking about the economic future, even if we’re really not able to do much about it. Investing is about positioning one’s portfolio for the best possible outcome given both available returns and the (seemingly endless) risks that conspire to yank those returns back to earth. With this in mind, we thought we’d summarize what we see for both the US economy and stock market in the New Year.

First the economy. Weak is, again, the word. Not acutely weak, as in recession, but more chronically weak, as in the “half-baked” variety we’ve described over the past several years. US Gross Domestic Product (GDP) in 2016 is likely to plod along at the 2 percent growth rate seen for the last 6 years (see chart). 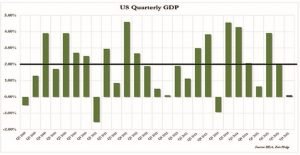 And for the next few months at least, risks appear skewed to the downside. Energy companies continue to aggressively cut their capital spending budgets after the collapse in oil prices. The US drilling rig count has fallen by 70 percent since June of 2014, according to BakerHughes, Inc. Chemical, steel and non-ferrous metal manufacturers are suffering from ongoing slowdown in China. In addition, the benefits from lower energy prices have yet to be fully realized by consumers. Higher medical costs have negated cheap oil and gas for millions of households, as spending remains impaired by higher deductibles and copays for medical insurance. As a result, we’ve experienced much of the economic downside and not much of the upside since oil peaked nearly 2 years ago. If medical costs simply level off, the big drop in energy costs will finally shine through for the majority of US consumers and businesses. Domestic automakers are already seeing it, as US light vehicle sales hit a 17 million seasonally-adjusted annual rate in December (see chart).

Even more critically for the Big Three domestic nameplates (GM, Ford and Chrysler), a big chunk of the recent sales growth is coming from hyper-profitable trucks and SUVs. Overall consumer balance sheets are in decent shape as well. Disappearing interest rates have driven debt service costs as a percentage of disposable income to 30-year lows (see chart).

All in, there’s no denying that the industrial side of the economy has faltered since autumn, mostly due to ongoing pain in the energy patch. But the consumer is still in the game. Jobs are plentiful, home prices continue to recover and confidence is holding at multi-year highs. A mixed picture for sure, but certainly not the dark portrait of systemic financial failure of 8 years ago.

Which brings us to the stock market. We cannot emphasize enough that today is NOT 2008, no matter how many times the gloomers and doomers blog, email and tweet about it. Human investors (of which there seem to be fewer and fewer each year—a topic for another day) suffer from something called “recency bias.” This is the tendency to give greater emotional and cognitive weight to events in the recent past, rather than those more distant. Thus the 2008 crash looms larger in our collective investing conscience, and we naturally fear a repeat. But a quick glance at basic financial fundamentals tells us we’re just not set up for it. Exhibit A is the banks—ground zero for the problems last time around. US commercial banks are in far better condition today than 2008. Federal Reserve data show that US banks are far better capitalized, have trillions more dollars in short-term reserves and loan loss provisions so robust their auditors are reluctant to allow further increases. In short, they’re flush, and ready to lend into a downturn rather than close up shop like they were in 2008.

Exhibit B is the magnitude of any potential problem. Granted, the pain this time around in the energy patch is severe. Oil is down over 70 percent in 18 months. But could this collapse bring down the whole US financial system, as occurred 8 years ago? The answer is no, and the reason why goes to the issue of magnitude. There simply is not enough energy debt outstanding, even if it all went bad, to drag down the system. According to data compiled by FactSet, the aggregate net debt of U.S. oil and gas producers at the end of June 2015 was $169 billion.

This compares with over $1.5 trillion of questionable mortgage debt outstanding at the end of 2007, a difference of nearly 10X. The financial troubles from weak oil are severe, particularly in places like Mexico and Brazil, where broad energy dependence is much greater. Over time, some of this overseas pain may bleed into domestic banks, but in the end the problem is simply not big enough to bring down the entire system.

Bottom line: continued choppiness in economic trends for the year, with 1.5 to 2 percent growth a good bet. General consumer health offsets energy and industrial weakness, and the stock market marks time until lower oil prices flow through to the broader economy. Finally, no replay of the 2008 mess—no matter what the Twittersphere says!