As we are all well aware, 2020 was consequential year for all of us. What begun as one of the strongest U.S. economies in history, quickly turned negative towards the end of the first quarter as the  reality of the Covid-19 virus took hold. 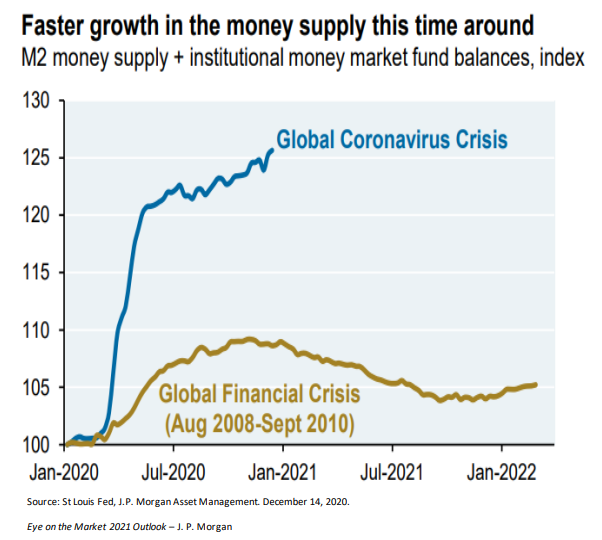 Unlike the previous economic collapse of 2008-2010, the Federal Reserve learned that massive, early intervention was needed to establish an orderly market to buy and sell fixed income products in the trading universe. As the slide shows, the amount injected into the system was far and above what was done during the financial crisis. In fact, the $3.25 trillion was more than 2.5X the $1.4 trillion done in 2008-2010. 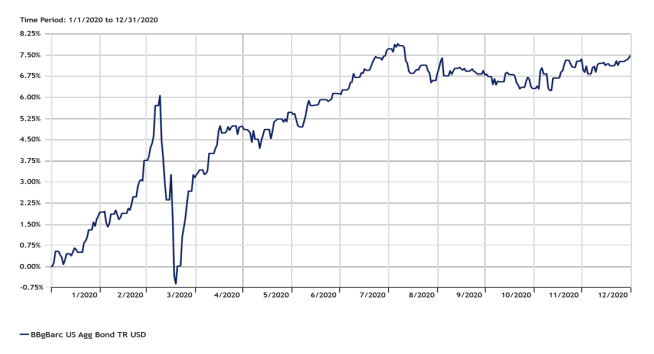 To illustrate the magnitude of the damage done to even the highest-grade corporate bond market, slide two shows how bad liquidity was during the early stages of the pandemic.

We can see that 2020 began with a sharp rise in performance and then fell off a cliff in March. Similar to 2008-2010, the fixed income market froze up as investors had a large flight to quality in cash and/or U.S. Treasuries.

Then, after the previously mentioned Fed intervention, they were able to re-establish an orderly trading arena for most bonds across the credit spectrum. Again, the Fed saved the day.

Due to the aforementioned flight to quality, the yield curve shifted dramatically downward from what was already a depressed yield curve.

The short-end finished the year hovering around 0% while the longer end 30-year couldn’t break the 1% mark. Can you imagine lending someone money for 30-years and getting less than 1% on your 3-decade investment? I can’t but clearly, it is happening.

Although this is a great deal for the lending entity such as banks and the government as well as people wanting to refinance debt, the savers of the world were left with little return for their commitments. 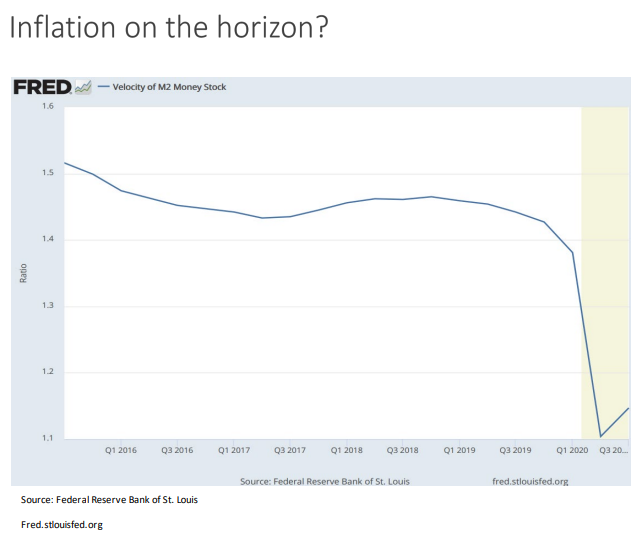 As the above illustration shows, although there has been an enormous amount of money pumped into the system, much of it is not yet being passed around.

This shows a couple of points, first many individuals, as well as corporations, are sitting on cash in fear of another shoe to drop, but it also shows that with vaccines right around the corner, we can see a large increase of money exchanging hands in 2021.

Of course, this is positive news but with it comes a caveat of the possibility of increased inflation. Given the lack of any inflation in the last decade or so, this may be a welcomed sign in order to bring the yield curve back to a reasonable level.

It will be an interesting battle between the Fed, who has promised to keep rates low, and the market, who may demand higher rates to accommodate the perceived inflation in 2021.