There were two distinct phases to the first quarter. The first was characterized by an equity market surging to all-time highs. This phase quickly faded into what seems like a distant memory following the emergence of COVID-19 as a global pandemic, largely shutting down the global economy. Financial markets were derailed as investors attempted to assess the extent and duration of both the human and economic toll wrought by the virus. The Dow and S&P 500 experienced their worst first-quarter performances in history. Equity market volatility spiked to levels that surpassed the peak of the Great Financial Crisis of 2008/2009 and rivaled the all-time highs in the late 1980s.

While the precipitous drop in interest rates benefited Treasury sector performance, the same cannot be said of other segments of fixed income. Both investment grade corporate bonds and high-quality municipal bonds (areas where we primarily focus) were sold indiscriminately in the first half of March. Anticipation of severe near-term economic weakness translated into credit concerns, and a broad-based “liquidity grab” exacerbated bond price declines.

The corporate and municipal bond markets recovered to a large degree in the back half of March, as the Federal Reserve stepped in aggressively with numerous policy actions. In a matter of weeks, the Federal Reserve slashed interest rates to zero, announced an “unlimited” quantitative easing program and reopened several emergency programs designed to boost liquidity and support financial markets.

The chart below details first quarter performance of several investment grade corporate and municipal bond indices. Both the mid-March stress and the month-end recovery are apparent. 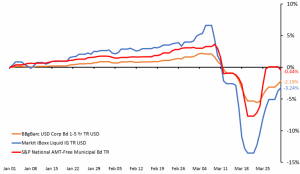 Roughly 80% of Americans are under some form of restriction as the country looks to “flatten the curve” and prevent a spike in COVID-19 cases from overwhelming the healthcare system. No one needs an economics degree to understand that social distancing and shelter-in-place initiatives will have a profoundly negative impact on both the U.S. and global economy.

Recent economic data indicate that the U.S. economy likely entered recession late in the first quarter. Unemployment claims, auto sales, and manufacturing and services activity have been eye-poppingly bad. Still, consensus expectations are for the brunt of the economic decline to be felt in the second quarter.

The table below shows quarterly and full-year GDP estimates from a handful of investment banks as of March 23. We caution that with estimates evolving rapidly, some of these data may be stale by now:

While the short-term economic picture is quite sobering, we fully expect to see a robust recovery once the economy reopens for business. That said, the timing of both the COVID-19 peak and a return to normal for U.S. business remains uncertain. In the meantime, policymakers’ focus is on “bridging the gap” and steering us away from the worst-case scenarios.

The CARES Act, a massive $2.3 trillion stimulus plan enacted in late March, is the largest in U.S. history. It equates to about 11% of annual U.S. GDP. We expect this package to help cushion the blow of the economic shutdown by keeping small businesses afloat and getting cash into furloughed workers’ pockets. Congress has already begun conversations on the next round of stimulus.

A more detailed overview of the CARES Act is shown below: 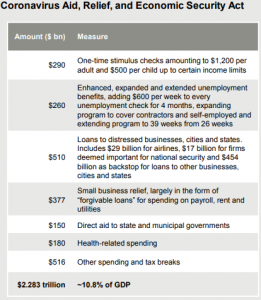 We recognize that the unprecedented spike in volatility, huge daily market swings and bleak near-term economic picture are painful and hard to watch for investors. However, several important factors shape our forward-looking investment views. Some of those are detailed below.

Looking back over the last 11 U.S. recessions, the S&P 500 Index registered an average peak-to-trough decline of 33% in recessions defined as “severe”. The S&P 500 declined by roughly 34% from February 19th through March 23rd. Given this decline, we believe a lot of bad news and negative outcomes have already been incorporated into stock prices.

Compared to other recessions, we believe we have a better roadmap for how this one ends. While we cast a skeptical eye on anything reported from China, observable data and commentary from U.S. business leaders operating in China suggest their economy is coming back online after being hit hard. The same can be said for South Korea, which took very aggressive (and intrusive) policy steps to contain the virus. We are also encouraged to see the “curve” start to plateau in some of the most heavily impacted countries in Europe, such as Italy and Spain. We believe these signs bolster the view that there is an “other side” to this period of economic stress.

As long-term investors, we need to remember this, and focus on a couple of extremely important points:

First – markets don’t wait! Equity markets are forward looking. They’ve historically bottomed well before whatever crisis caused the decline, and well before all the bad news is out. The charts below provide useful context on this point.

1970s stagflation crisis – The stock market did not wait for the unemployment rate to decline (or even peak!) before moving higher. 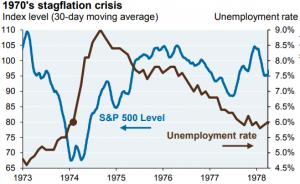 1989-90 S&L crisis – The financial sector did not wait for bank failures to stop before rebounding. Bank stocks bottomed years before bank failures peaked. 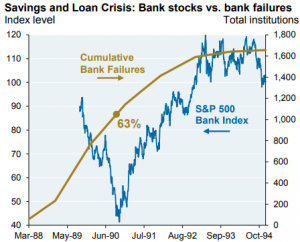 Financial crisis – Similar to the savings and loan crisis, bank stocks bottomed years before the last of the bank failures. 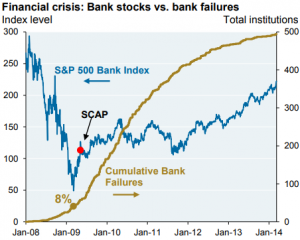 Additional examples are plentiful. Applying what we have learned from previous severe stock market declines leads us to conclude that markets aren’t going to wait until all the scary headlines stop, economic conditions improve, a vaccine is fully developed or the last COVID-19 patient recovers. Instead, the stock market prices in the risks, uncertainties and potential negative outcomes – often overshoots to the downside – and then moves on!

Below is a good illustration of the path various asset classes have followed during the “move on” phase in the previous four bear markets. That path has been decisively higher for risk assets. We recognize staying the course and sticking with a well-established investment plan can be uncomfortable during a bear market. But making dramatic portfolio changes or abandoning stocks after a severe market decline can literally wreck a lifetime of good planning. 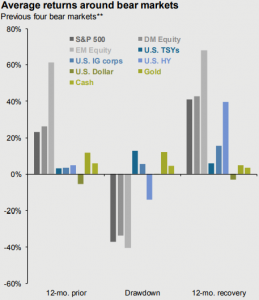 We will follow up shortly with some additional thoughts and market commentary. In the meantime, we’ll wrap up with the quote below. It’s a good one.

“What has so often excited wonder, is the great rapidity with which countries recover from a state of devastation, the disappearance in a short time, of all traces of mischief done by earthquakes, floods, hurricanes, and the ravages of war. An enemy lays waste a country by fire and sword, and destroys or carries away nearly all the moveable wealth existing in it: all the inhabitants are ruined, and yet in a few years after, everything is much as it was before.”