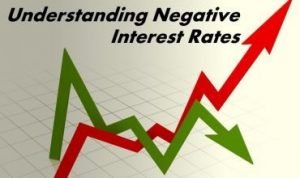 We’ve been hearing a lot of talk about negative interest rates this past week. In times of extreme stress, financial markets behave in extraordinary ways. The more volatile the stock market, for example, the more difficult it is to find rational buyers and sellers. Today we’re seeing these same distortions in the U.S. Treasury bond market. Due to extreme imbalances between supply and demand for short-term Treasury Bills (1-month maturity or less), U.S. interest rates in the secondary market have turned negative in some instances.

What do we mean by interest rates turning negative? Imagine an investor in ABC Money Market Fund. ABC Money Market is seeing redemptions rise (people want their money out) due to fearful selling in the markets in general. In order to slow this cascade of selling (which could bankrupt the fund), the fund must put up a “gate” of some sort – which slows or stops the release of cash to investors. One way to do this is by price. In order to get their money out, investors might be forced to accept less than $1 per share on their holdings. Instead of receiving $1,000 in their monthly withdrawal, for example, they might get $999. They’re effectively getting negative interest.

There are a lot of moving parts to this negative interest issue. At the heart of it is the need for liquidity, and the most liquid security on earth is the U.S. Treasury bill. Companies, endowments, money funds, and individuals are all moving away from (less liquid) corporate obligations and toward Treasury-backed funds in this time of crisis. Essentially, everyone is trying to go through the same door – and the door is too small. Also, access is not first come first serve, but rather who is willing to pay the most to get through. If someone is willing to take a major haircut (willing to accept less than dollar-for-dollar through a negative interest rate) to get out, the people in charge of the door can give priority to the haircut-takers. This is what accentuates negative interest rates, and allows them to be sustained in a time of crisis.

In time, this supply/demand imbalance will fix itself as the Fed adds more short-term Treasury Bills to the market, and people get more comfortable with taking other forms of collateral. Contrary to what some news sources are saying, this has happened before – and ultimately resolved itself. To do so again will require Fed intervention, and the willingness of investors to wait their turn to get through the door.

Unfortunately, we’ve seen some media outlets sensationalizing this short-term imbalance and spreading false information about the situation. The U.S. is not issuing Treasury Bills at negative interest rates like Germany, Japan or other foreign countries – and it is not (yet) our policy to do so. We can never say never, but the U.S. policy is to not go below zero, as our policymakers have stated so many times. The most important thing for investors to do here is to stay calm, and not rush the door. We anticipate that rates will stabilize – back in positive territory – soon.