Just in time for Father’s Day, we have one especially proud Dad here at Fort Pitt. Daryl Patten, partner and senior vice president, shared with the team that his son, Nick Patten, has been signed with the Pittsburgh Pirates!

Nick, a current student at the University of Delaware and first baseman, was selected by the Pirates during the MLB draft’s 28th round. Playing professional baseball has been Nick’s dream since he was a young boy, and he has dedicated much of his time and focus throughout his life to the sport. While playing for Delaware’s Blue Hens, Nick was recently awarded the Colonial Athletic Association Player of the Year, and has put up impressive stats this season – including nine home runs, 14 doubles, 38 walks, and his .386 on-base percentage.

Congrats to the Patten family, and best of luck, Nick. We will be rooting for you! 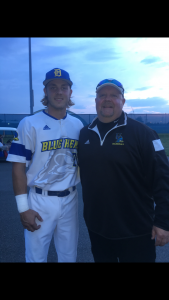