The fourth quarter of 2016 was anything but boring in the bond market. The U.S. Federal Reserve continued to play a vital role, ultimately raising short term interest rates for the first time in 2016 in December. However, it was not for the reasons that were expected. With the surprise election of Donald J. Trump as President on November 8, bond prices fell (interest rates rose) and the Fed was essentially forced to follow the market’s lead by increasing the Fed Funds rate. Prior to the election, conventional wisdom held that a Clinton win would result in economic “status quo” for the next four years, and the bond market reflected that complacency. Before the election, many market handicappers had even predicted that a Trump win would cause stocks to sell off and bond prices to rise (yields fall). This obviously did not happen. As usual, markets did what confounded the maximum number of participants.

President Trump’s proposed economic remedies include lower taxes, deregulation and increased fiscal stimulus. If taken at face value, they could mark the beginning of the end of the 30-year bond rally. Each of these policies on their own should spur faster economic growth and (potentially) higher inflation. Taken together, they may force central bankers to finally get serious about raising interest rates. As the graph below shows, the bond market was taken off guard by the election, and immediately “baked in” all of Trump’s policies being implemented in full. Interest rates rose across the board between Election Day and year end, with long-term Treasury rates increasing the most. The 10-year Treasury rate was at 1.82 percent prior to the election, and jumped to 2.59 percent by mid-December. This increase was the largest we’ve seen since the infamous “Taper Tantrum” of 2013.

As market attention shifts from a “Do-Little” Fed to a growth-oriented administration, a paradigm shift among policy makers also appears to be taking place. The message: more interest rate increases are coming. Fed governors are signaling that they will be gradual, with perhaps three or four increases in calendar 2017. Money markets are skeptical, with Fed Funds futures only pricing in one or two increases at the moment. Stay tuned; a lot can happen in a twelve month period. 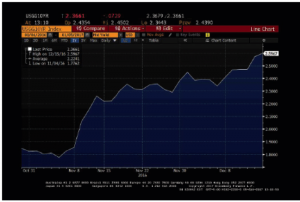 Fort Pitt Capital Group is an investment advisor registered with the United States Securities and Exchange Commission (“SEC”).  For a detailed discussion of Fort Pitt and its investment advisory fees see the firm’s Form ADV Part 1 and 2A on file with the SEC at www.adviserinfo.sec.gov.

The views expressed herein represent the opinions of Fort Pitt Capital Group and are not intended to predict or depict performance of any particular investment. All data provided by Fort Pitt is for informational purposes and should not be construed as investment advice. The information herein was obtained from various sources; we do not guarantee its accuracy or completeness.