While the overall bond market faced challenges last year amid a rising interest rate environment, high grade municipal bonds are forecasted to perform better in 2014. Throughout time, municipals have been a sound alternative in most fixed income portfolios with either institutional investors’ strategies or retail investors’ plans. Below, we highlight our outlook on the municipal bond market, and what investors should keep in mind as it relates to the asset’s expected performance. 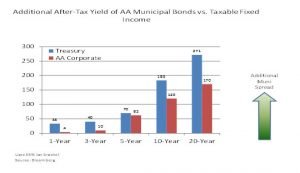 By adapting the Tax-Equivalent Yield (TEY) formula, investors can easily decide which investments are more advantageous in their portfolio. For example, if they are in the 35 percent tax bracket and are trying to decide between an AA municipal bond paying a 4 percent return, or an AA corporate bond paying a 6 percent yield, they need to calculate the TEY for the municipal in question as follows:

In this example, and with all else being equal, the investor would choose the municipal bond over the corporate due to the higher TEY (6.15 percent vs. 6.0 percent).

However, if an individual in the 25 percent tax bracket was to analyze the exact same bonds, they would come up with a different conclusion. The TEY for this individual would be as follows:

Again, with all else being equal, the individual in the 25 percent tax bracket would choose the corporate bond at 6 percent since it is higher than the TEY of 5.33 percent for the municipal bond.

As the examples show, the higher tax bracket investors will be more inclined to seek the advantages of municipals as the excess returns decline for individuals in the lower tax bracket.

Although the vast majority of municipal bonds are exempt from both federal and state taxes for an individual living in the issuing state, there are some that are not exempt and should be confirmed as such prior to investing. Bonds issued by a U.S. territory are triple tax exempt from federal, state and local taxes.

Recent events by issuers in Harrisburg, Detroit and Stockton have negatively affected the muni market, but none of these bankruptcies happened overnight, and all showed signs of weakness well before the actual bankruptcies took place. Although the price depression would not have been eliminated, constant analysis and review of the issues are essential in maintaining a healthy portfolio of municipals.

Being able to spot areas of concern and removing them from a portfolio are just as important as adding high performing securities to your basket of investments. Unfortunately, one default that results in a loss of principal can negate years of positive returns if the securities are not monitored correctly.

Historically, municipal bond default rates have been relatively low, especially compared to corporate bonds. Since 1970, there has never been an AAA rated municipal bond to default. Similarly, in the same time frame, only .01 percent (1 in 10,000) has defaulted with an AA rating. By contrast, AA corporate issuances have had a .90 percent (1 in 111) default rate since 1970. As the chart below shows, when the credit structure decreases, the odds of a default rise. However, the percentages are much higher for investment grade corporates compared to municipals. 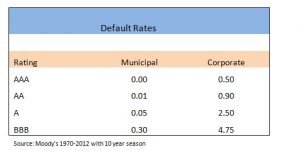 An important fact to recall while analyzing the historical data is that bankruptcies are not the same thing as defaults. In fact, the overwhelming majority of Chapter 9 bankruptcy protected municipalities continue to pay interest on their debt as they restructure their finances. An example of this would be the Orange County, California bankruptcy in 1994. This municipality bankruptcy sent shock waves through the municipal market due to its high profile name, although the majority of debt holders were able to recover 100 percent of their principal when all was settled. Furthermore, of the 54 municipality bankruptcies since 1970, only three have actually defaulted, including Baldwin County Alabama 1988, Jefferson County Alabama 2009 and Sierra Kings Health Care, California 2009.

Bankruptcies and defaults do not always equate to a total loss of investment value. Due to a number of distinctions between municipal and corporate debt issuance, municipal bonds tend to have a higher recovery rate. The largest advantage for a municipal bond holder is that issuers of municipal debt only have one viable outlet to raise cash and that is through the muni market. In order for a municipal issue to continue to access the market, they must remain current on their outstanding debt. The municipal bond issuer has a vested interest in paying their existing debt to access the market in the future. Although corporate issuers have the same concerns, cash can be raised through an equity issuance as well if needed. Therefore, both pricing and recovery rates on comparably rated issuance of municipals and corporates is much better for municipals in times of distress. According to Moody’s, the ultimate recovery rate for a municipal bond in default is 67 cents on the dollar while the average recovery rate for a corporate bond in default is 16 cents on the dollar.

Although past actions and returns are not a guarantee for the future, analyzing historical data and researching individual municipalities should enable investors to make better investment decisions.