The US economy can’t get out of its own way. Seven years of sub 3 percent economic growth have discouraged millions of middle and working-class families and deferred the dreams of the millennial generation. This (seemingly endless) saga of lingering debt, stagnant wages and jarring income  inequality has flummoxed economic policymakers and spurred populist movements on both sides of the political aisle. Donald Trump and Bernie Sanders are creatures of the ongoing economic malaise.

With the crazy 2016 election campaign now over, the economic growth equation remains simple, yet daunting: more people plus higher productivity equals more output, higher profits and higher wages. Unfortunately, while the population has been growing steadily, productivity growth has waned for quite a while. According to the U.S. Department of Labor, since the mid-1960s, the three-year average growth rate of US non-farm productivity has slowed from 2.5 percent to 1.3 percent per year. A one percentage point slowdown doesn’t sound like much, but the compounded result of this extended slump is a huge shortfall in output. Today the average US worker earns 40 percent less than if the 1960’s productivity rate had lasted into the new millennium, and the problem is worsening. After rising somewhat during the tech boom of the 1990s, annual productivity growth has averaged less than 1.2 percent since 2007.

What factors are driving this trend? One is the advent of the so-called “service” economy. As the graphs from the Wall Street Journal demonstrate, people who provide personal services are just not as productive as those who work on the factory floor. According to the Wall Street Journal, American households spent $8.3 trillion on services last year, and service productivity has actually been negative since the 1980s. This disparity has been especially pronounced in the fast-growing segments of health care and education. 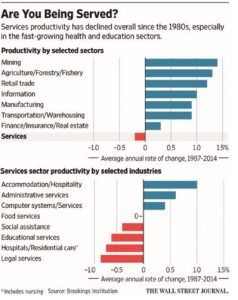 Note also that many of the services listed in red at the bottom of the chart are provided by the government. Public workers generally have less productive incentive than their private counterparts, as no government program ever failed for lack of customers. Further, many politicians define economic growth in ways counter to the profit-oriented notion outlined above. They promote “make work” projects to win votes, with little regard for long-term economic costs. It sounds cynical, but it’s a proven route to electoral success in a world dominated by 2-year election cycles. (Remember this when talk of multitrillion dollar “stimulus” programs hits the airwaves in 2017.)

Bottom line: we’re stuck in an economic cul-de-sac. Our economy is service dominated, and productivity in services has consistently run behind manufacturing. To top it off, government—the least productive economic segment of all—is gaining share of Gross Domestic Product.

So how do we extricate ourselves? Do we even want to extricate ourselves? There are no guarantees, after all, that regaining the glory days of US productivity would result in broadly higher wages for millions of US workers. Instead, the fruits of future productivity gains might flow mostly to the highest earners, just as they have for the last 20 years. Consider a widely touted remedy for the US productivity conundrum: automation. Who benefits from automation? Certainly not the worker who loses his job to a robot. No— it is investors who gain—by substituting their capital for labor. Workers gain if their wages rise as a result of working with the robot. If they keep their jobs, they’re likely to benefit. If they get fired, not so much.

Fortunately, there is one economic force which allows workers and middle class consumers to benefit from automation and broad productivity gains. This force is the sine qua non of a healthy economy—if “healthy” means the greatest economic benefit to the greatest number of players. Yet this force is one which the highest powers of government and finance will move heaven and earth to prevent. I’m speaking, of course, about deflation.

As we’ve seen in the 2016 election season, if the fruits of economic growth are not widely shared, political turmoil can result. If this turmoil is severe enough, it can degrade the host economy. Therefore, if it wants to survive and thrive, a properly functioning economy should drive the benefits of productivity growth out to the masses. Deflation is the market mechanism that does this, as lower prices drive higher real wages. This is another way of saying that the best economy is one which treats consumers and households—not producers, banks and governments—best. Competitive, productive businesses welcome deflation, because it allows them to sell more goods, albeit at lower prices. These businesses grow by taking advantage of scale economies. Consumers obviously welcome it as well, because they can buy more goods at lower prices. Banks and governments, on the other hand, abhor deflation because it erodes the security value of assets (loans) and reduces tax revenues. In this way it directly threatens both their power and their livelihoods.

If you don’t believe that banks and governments are threatened by deflation, ask yourself why the US Federal Reserve has instituted a policy of devaluing the US currency by 2 percent per year. Though the Governors of this quasi-public, quasi-private institution will tell you that the Fed’s 2 percent inflation mandate is designed to promote “economic stability and growth”, the real purpose is to support bank asset values and the revenue streams of governments. We believe the Federal Reserve, one of the most powerful institutions in the nation, the institution at the nexus of banking and government, is purposely devaluing your money at a rate which will shrink its buying power by 70 percent over 2 generations. Why on earth would they do this? They’re doing it to simultaneously navigate a still over-levered financial system, and prop up governments that refuse to live within their means. In the end, “controlled” inflation is their only answer; it is their 2 percent solution.

To summarize: We’re suffering as a nation from anemic economic and productivity growth, the latter for nearly 5 decades. We’ve shifted to a service economy over the past 25 years, as much of our manufacturing base has left for greener pastures overseas. This shift has further exacerbated both our productivity shortfall and income inequality. The solution to these problems is not necessarily renewed productivity growth, however, as it is not obvious at this point that gains from increased automation would flow through to the masses. The tried and true mechanism for suffusing these benefits down the economic value chain is deflation, but our most powerful institutions appear to have no interest in seeing it happen. Instead, we gradually inflate our way back to “prosperity”, such as it is.