The great Treasury Bull Run (see Exhibit 1) is over. That was the consensus exactly one year ago, as the vast majority of strategists and economists predicted higher interest rates in 2014. And why not? The Federal Reserve had signaled the end of Quantitative Easing (QE), unemployment was falling fast and housing was perking up nicely. Nearly every economic indicator pointed toward higher yields (lower prices) for both short and long-term Treasury bonds. 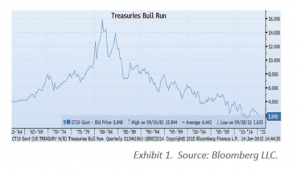 So what happened? In a complete smackdown for the conventional wisdom, the bull run continued, and even accelerated. Yields fell dramatically (meaning bond prices rose), particularly on the long end of the yield curve. According to Bloomberg LLC., the price of the 30-year U.S. Treasury bond ended the year up 27%, the 10-year Treasury ended higher by 11% and the Merrill Lynch 1-5 index ended up 1.84%. Long-term Municipal bonds rebounded as well, flipping from a 2% loss in 2013 to gain over 9% in 2014.

The reasons for the continued run in bonds were numerous and, for the most part, unforeseeable at the beginning of 2014. From the portfolio manager’s seat, it felt as though every time interest rates were poised to rise following a good economic number, someone or something would reverse the movement. Between dovish comments from policymakers and geopolitical events, interest rates never got any real traction to the upside.

Fed Chair Janet Yellen made it clear throughout the year that the Fed wouldn’t be raising short-term interest rates for a “considerable time.” She and her team repeatedly reassured investors that rates would remain low. This sort of “jawboning” has become a key Fed tool, and they used it to full advantage. For whatever reason, the Fed doesn’t seem comfortable raising rates, and continues to insist that any increase will be data dependent. This while the economic data have been uniformly good. Similar to Yellen, European Central Bank (ECB) head Mario Draghi made numerous dovish comments during the year, building on his remarks from July of 2012 that he would do “whatever it takes” (i.e.; print billions of Euros) in order to save the Eurozone. Talk is cheap, but it certainly served to keep interest rates low in 2014.

In addition to monetary events, a topsy-turvy geopolitical mix in 2014 added to the recipe for lower rates. The formation of ISIS in the Middle East, China’s slowdown, ongoing political turmoil in Europe, Japan’s never ending recession, Russia’s Ukraine incursion and Saudi Arabia’s refusal to cut production amid collapsing oil prices all stirred the pot. Of these events, the Saudi action has the most potential for capping inflation in the near term, and thereby keeping a lid on interest rates. In the U.S., in fact, the Consumer Price Index is likely to show year-over-year declines for at least the first six months of 2015 due to the oil collapse. This will almost certainly give the Fed further pause about raising rates. 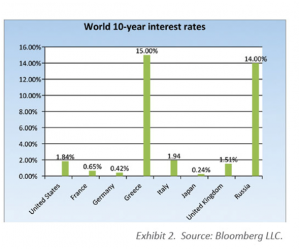