We’ve written many times over the years about the problems which come from excessive Federal spending and debt. During the government shutdown in 2011, for example, we propounded the Republican budget plan to pare Federal spending as a percentage of Gross Domestic Product (GDP) to 20% and keep it there. At the time, President Obama wished to maintain spending at 24% of GDP. We said the nation’s economic future might hinge on this simple four point difference. On average, the Internal Revenue Service collects about 18% of GDP each year in taxes, no matter the tax rate. We said history had demonstrated that a 2-percentage-point deficit was manageable, while a sustained 6-point gap could lead to fiscal ruin. Such are the cruel realities of a mature economy and compound interest; debt simply cannot grow faster than GDP for long.

In the fall of 2012, we repeated our warning that the U.S. government had “maxed out” its credit card. We said that Federal spending, which soared during the recession as a result of outlays for unemployment benefits and various stimulus programs, could not continue to grow at the rate it had, because if it did it would bankrupt the country.

Fast forward two years, and we’re happy to report some serious progress on the fiscal front. The red line in the chart at right (which we reprise from our October 2012 newsletter) shows that Federal spending as a percentage of GDP is swinging back toward the long-term average of 20%. Credit for this change goes mostly to “sequestration”—a mechanism agreed to during the budget impasse of 2011 that reduced Federal spending by $150 billion (about 1% of GDP) per year between 2013 and 2021. The rest of the credit goes to improved tax collections resulting from faster economic growth. Separating cause from effect is always difficult in economics, but the strong U.S. economy and stock market deserve some credit for the better fiscal picture. As the green bars in the chart show, we’re back on a path toward a deficit equal to 2% of GDP, in line with historic averages. All in all, a potential win for taxpayers and the economy at large. 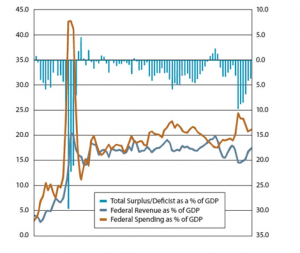 A broader trend remains in place, however, which could still snatch defeat from the jaws of victory. Historically Americans have been overly reliant on debt to generate economic growth. With interest rates at historic lows (and in some cases negative), this wouldn’t seem to be a big deal. But the flip side of low cost borrowing is that returns from debt have been steadily diminishing as well. Up until the mid-1960s, each additional dollar of debt (combined private and public) within the U.S. economy generated at least one additional dollar of growth. Over the past 50 years, this ratio has trended steadily downward. Federal Reserve data show that today each dollar of borrowing generates less than $0.20 of GDP. Presumably these diminishing returns reflect a larger public component to the debt, as public spending on social benefits and services (Social Security, Medicare, etc.) has displaced both public and private investment over time. In addition, the velocity of money has fallen since 2000. If this trend continues, we will soon cross the “zero” line, where (at least theoretically) each new dollar of debt incurred actually subtracts from GDP. Obviously uncharted territory—and, as with negative interest rates, not necessarily somewhere we want to go.

Fortunately U.S. consumers and businesses appear to realize it. They’ve spent the last 6 years slowly cutting debt and cleaning up their balance sheets. Government remains the outlier, but has begun to make progress as well, as mentioned above. For the sake of the long-term health of the economy, we need to keep at it. Tens of millions of aging and retiring Baby Boomers will put enormous pressure on the public purse in the years ahead, as politicians continue to promise more benefits than taxpayers can deliver. These promises will result in ongoing fiscal deficits. If they are large enough, and last long enough, debt will again compound to the point where it becomes untenable at market interest rates. At that point the central bank (ostensibly a private entity— but controlled by government) will again print money in order to drive down borrowing costs, buying time for the government to get its house in order.

This is essentially where we are today, in a world of disappearing interest rates as a result of Fed money printing, and a (somewhat) chastened Federal government. Looking forward, sustained U.S. economic outperformance will likely depend on the next step in the recovery process, which is to permanently reduce our reliance on debt as an economic driver.