Back in 2002, then U.S. Secretary of State Colin Powell had a very blunt and direct way of framing the dilemma over invading Iraq. He called it the Pottery Barn rule: “You break it, you bought it,” he said. Powell’s phraseology ultimately proved prophetic – presaging a painful chapter in American history which most of us would like to forget.

We bring it up because in recent weeks we’ve seen similar chatter in the financial press about the U.S. economy – specifically the Federal Reserve’s ongoing effort to raise interest rates. Investors are concerned that the U.S. central bank will repeat the failures of 2008, when it tightened too much, and was forced to turn around and slash interest rates and print trillions of dollars to stop a run on the financial system. In short, people are worried that the Fed will tighten until something breaks – just as it did in 2008.

It all sounds rather ominous. Last time around, nearly the entire financial system railed. The Fed and other big central banks worldwide ended up owning large portions of the bond market. It took eight years of money printing to rebuild the capital of the banks. It was the bailout of all bailouts! Could it happen again this cycle? We don’t think so. We think that this time around the Fed will continue to tighten, and the system will at some point experience a normal cyclical decline. But the consequences for both the economy and the financial system will be far less severe than 2008. The Pottery Barn analogy helps us understand why.

Cheap clay urns are inherently fragile. In 2008 the U.S. financial system was a cheap clay urn. It was chock full of bad mortgages and derivatives of bad mortgages. Equity capital as a fraction of total bank assets was near generational lows. Lending standards had fallen so low that NINJA (No Income No Job No Assets) loans were common, and golden retrievers had Visa cards. When the earthquake of falling house prices struck in 2007, the flimsy banking system teetered on the mantle for a few months – and then shattered on the concrete floor of economic reality. 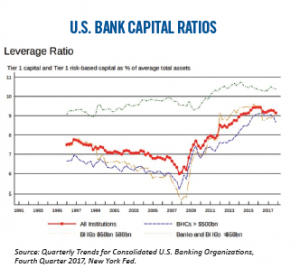 Things are decidedly different today. The U.S. banking system is much better able to withstand any tremors. The typical domestic bank has 52 percent more equity capital than 10 years ago (red line in chart). The Dodd-Frank regulatory regime has curtailed the brain-dead mortgage and unsecured lending that led to fragility in 2008. Loan quality, as measured by charge-off ratios, remains near decade highs.

Don’t get me wrong – there are some cracks in the system.They include excessive corporate debt resulting from borrowing to fund stock buybacks, looming student loan defaults and lingering credit troubles at several European banks. But, they tend to be hiding in plain sight, so to speak, and therefore largely discounted by markets. In 2008, for example, the rot in the mortgage system was not only fundamentally misunderstood due to the advent of derivatives, but more pervasive than anyone imagined. In investing, as in life, it is the bus that you don’t see that runs you over. Today, any financial accident stemming from excessive corporate, student or European debt is less likely to break the entire system, at least partly because  people will see it coming.

Finally, remember that the economy will get knocked over again; it’s only a matter of time. A recession will happen, but it doesn’t have to morph into a generational market panic, a financial crisis or eight years of broad-based economic malaise. When (not if!) it happens, we believe the consequence of a cyclical decline in the U.S. economy will be less severe than a decade ago. The economic “vessel” is simply much stronger this time around.