What is fueling the U.S. Treasury markets 2014 rise?

Have we reached the stage of capitulation?

Capitulation: noun. The usually forced yielding of one’s person or possessions to the control of others. (Merriam-Webster)

With the 30-year Treasury bond up over 16% for the year, we think it is important to dissect the factors behind the historic rally (Exhibit 1). Although capitulation seems to have taken place on the part of institutional and retail investors, there are other fundamental reasons for the historic rise in bond prices. The three main drivers of the rally include: 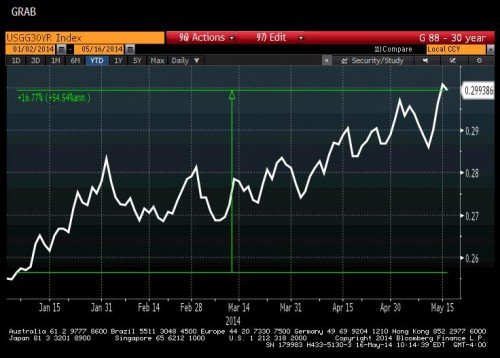 First and foremost, simple supply and demand can be attributed to a large portion of the recent rally. As the sequester was successful in reducing spending, and tax increases raised additional revenue, the U.S. government simply doesn’t need to issue as many bonds to finance its debt. With the Fed still purchasing $45 billion a month through Quantitative Easing (QE), the Treasury has a natural buyer for its debt, reducing the amount available to the investment community.

The second factor driving the rally in bonds is increased regulation after the 2008 financial crisis. Banks are now mandated to hold more cash, and corporations have been “advised” to hold more cash in order to avert another liquidity crisis. Given that banks and other corporations consider U.S. Treasuries (no matter the maturity date) to be cash, they are purchasing anything with a yield attached to it. With traditional cash investments yielding zero for the 5th year in a row, firms and individuals are putting money to work “out the curve” as a cash alternative.

Lastly, the Federal Reserve has not been as transparent in their communication as many had expected. The more the Fed backs away from using concrete data to steer interest rate decisions, the more investors use this as a rationale for keeping rates lower for longer. Late last year, for example, market consensus was that once the Fed was finished with QE, they would begin raising interest rates as soon as the end of 2014. However, weak economic data and geopolitical events (such as the turmoil in Ukraine), have forced the Fed to walk this guidance back, and indicate that any interest rate rise would be later than originally expected. Fed Funds futures now put the probability of a Fed rate hike into the latter part of 2015.

Any one of these factors alone might not have been enough to propel a bond market rally, but the combination has pushed up Treasury bond prices and surprised many investors.