With the 2013 Time Magazine Person of the Year award going to Pope Francis, we wondered what the economic “word” of the year might be if there were such a thing. If we had a vote, it would be “tapering”. Although you won’t find it in any economics text, tapering is proving a strong successor to last year’s winner: Quantitative Easing (QE). More importantly from the market’s perspective, tapering may have just as great an effect on how we view 2014 as QE did on 2013.

Similar to ex Fed Chairman Alan Greenspan’s 1996 “irrational exuberance” comments, current Fed Chairman Ben Bernanke’s tapering remarks on May 22, 2013 were a big market mover. Tapering, effectively a reduction in the Fed’s $85 billion monthly bond purchases, was initially viewed as snatching the punch bowl away from the party, and deflated both stock and bond prices. Six months of backtracking on the part of various Fed governors has since put the process in better perspective, however, and tapering has come to be not only accepted, but embraced. This is because Bernanke and friends have generally done a good job with regard to describing both how tapering might play out, and the conditions necessary to initiate the process. By continuously reminding markets that the punch bowl is still there (albeit a little less full), the Fed has reassured investors, allowing bond prices to stabilize and stocks to continue to rise.

By the time it was formally announced on December 18th, tapering was nearly fully priced into the bond market. On the date of the announcement, for example, ten-year and thirty-year U.S. Treasury yields were both about a full percentage point higher than they were in May, before the taper talk began (see Exhibit 1). After the announcement that the Fed would reduce its purchases by $10 billion per month, yields across the spectrum continued to drift upward, with the benchmark 10-year Treasury breaking the 3% threshold. 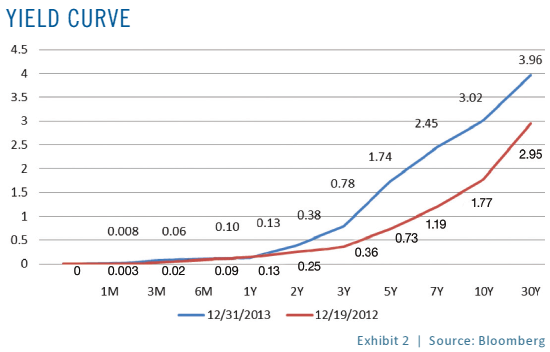 Better Fed communication since the summer has dampened bond market volatility, allowing the actual announcement to be pretty much a non event. Bond prices fell just prior to the official announcement, but at a much more controlled pace than earlier in the year (see Exhibit 2). In fact, the Fed has managed to not only price in a $10 billion reduction in QE, but also initiate a conversation about future reductions, as well as hint about cutting the interest on excess reserves (IOER) which the Fed pays to banks. Reducing IOER would cause a major shakeup in money markets, similar to the turmoil which hit the bond market last summer, so we see it as unlikely until the economy is on much stronger footing.

As for the economy, a consensus was gradually forming at year end that the Fed wanted to taper Quantitative Easing because domestic economic growth was accelerating. The jury is still out on this topic, however, as the December employment report was quite weak. If the data remains weak, prevailing opinion could spin just as quickly as it did in September, when everyone knew the Fed would taper, yet nothing happened. Two weeks ago the major surprise for the markets would’ve been if the Fed failed to follow through with tapering. Now there is talk that another bad month of data could cause QE to continue, or even increase!

Remember though, that no matter when it begins, tapering is NOT tightening. If the Fed decides to begin cutting back its bond purchases in January of 2014, this should not be interpreted as tightening monetary policy. A $10 billion per month pullback in bond purchases is symbolic at best, and has minimal bearing on economic activity. The discount rate, which officially is the only rate the Fed controls, and the Fed funds rate, which has a current target of 0-.25%, remain at historic lows. Until the Fed raises these rates, the official tightening of monetary policy has yet to begin. Futures markets indicate that the Fed funds rate will remain where it is for all of 2014, with a 50% chance of an increase in the first half of 2015. Tapering could start tomorrow, but markets believe the Fed will remain accommodative with regard to the cost of short-term money for at least the next 12 months.

The bottom line is that recent economic and financial crosscurrents are as severe as any we’ve seen since the 2008 financial crisis. Meanwhile the economic “word” for 2014 has yet to be spoken. Chances are good that when it arrives it will emanate from the lips of one Janet Yellen, the new Chair of the Federal Reserve Board. Maybe she can take a lesson from the Pope and start with “humility”, and work her way up from there.